Japan is an economic powerhouse, and its success can be attributed to several factors. First, the country has a highly skilled and educated workforce. Second, it has a strong culture of work ethic and diligence. Third, Japanese companies are well-organized and efficient.

Also Read: How to Search for DMW Jobs in Japan

Fourth, the government provides a stable and business-friendly environment. Finally, Japan has a strong global brand and is known for its quality products and services. These factors all contribute to making Japan an attractive destination for businesses and investors. As a result, the country can maintain a high level of economic growth even in times of global economic turbulence. 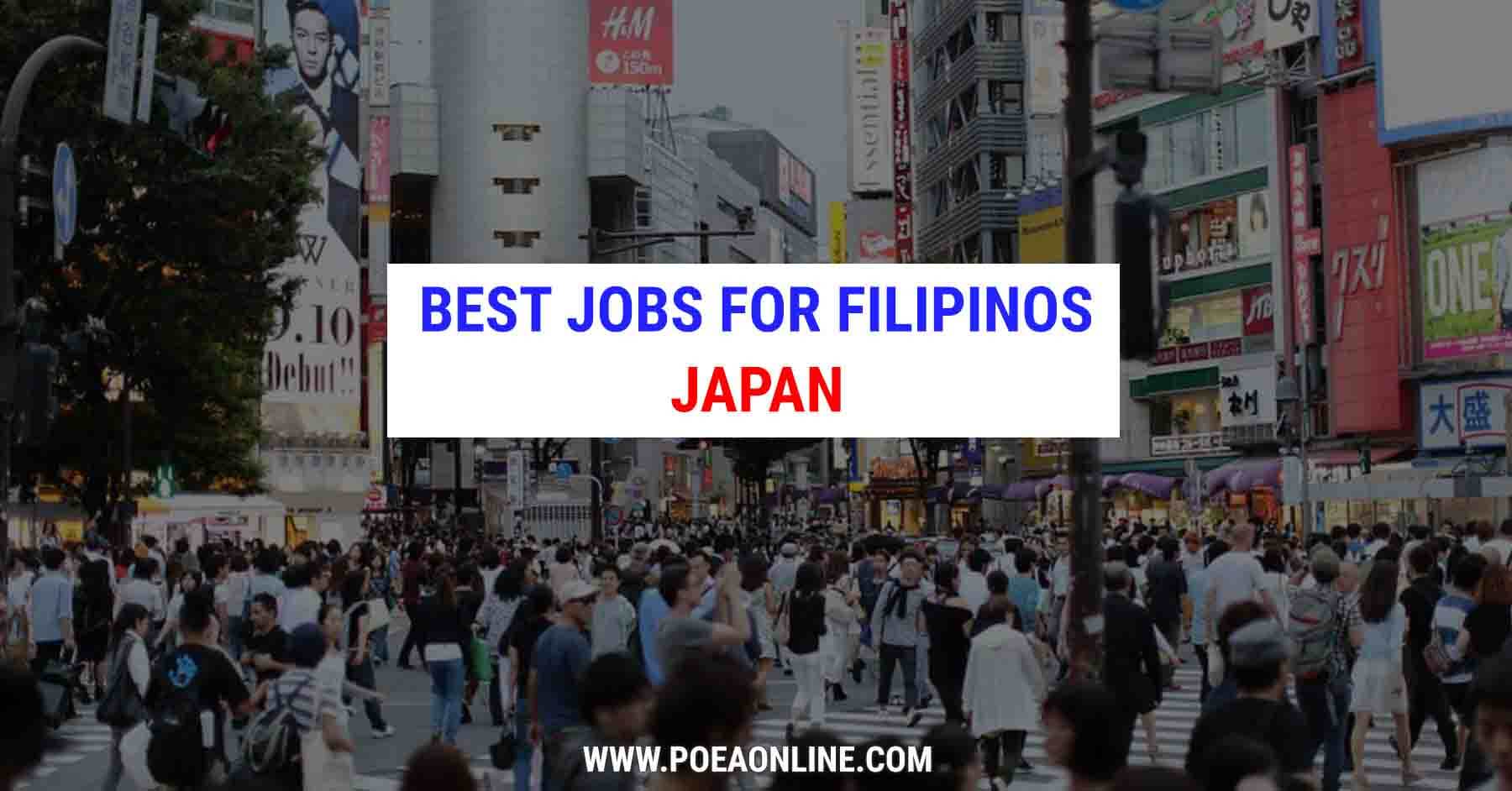 Department of Migrant Workers (DMW), previously known as DMW, is responsible for the accreditation of foreign employers and local recruiters. They validate jobs so Filipinos aren’t exploited. DMW lists all validated jobs. Here are the Top 10 Jobs for Filipinos in Japan as of 2022.

Filipino performing artists are in demand in Japan. Their ability to communicate in English is one of the key factors as it allows them to work as performers or entertainers in clubs, bars, or concerts. Another factor is their physical appearance which makes them suitable for being hosts or hostesses at restaurants and bars.

The Japanese entertainment industry is known for its cutting-edge technology and amazing creativity. In recent years, it has evolved into a highly globalized market that embraces new ethnicities, cultures, and languages. Filipino performers are in great demand because of their unique appearance and talent.

Housekeepers are in demand in Japan because they offer a good level of service at a reasonable cost. They can also be hired part-time and as on-call workers, which means that they can take care of their duties whenever they are needed instead of having to work for eight hours straight every day. In addition, Filipinos are known for being friendly, patient, loyal, and hardworking people who can provide excellent care to the elderly and disabled people of Japan.

Japan is one of the countries that hire Filipino housekeepers. Japan has a very high standard of living, which is why it has high pay rates for housekeepers. The Japanese culture calls for a lot of maid services, hence they prefer to hire Filipinos who are known to be extremely diligent and hardworking.

Japan is currently one of the most popular countries for Filipino engineers, specifically in the mechanical and electrical fields. There is a need for more Filipino engineers in Japan because there is only a handful of them. Most of them are already flooding other countries around the world, especially those with higher salaries such as Canada.

Engineers are in high demand along with other skilled workers because of the aging population and persistent shortage of workers triggered by the country’s low birth rate, according to the Japan Institute for Labor Policy and Training (JILPT).

Construction workers in Japan are quickly losing interest in doing the jobs they’ve been doing for years, but Japanese employers are currently struggling to fill vacancies. They’re looking abroad in search of qualified workers and finding them among Filipino construction workers who have been steadily leaving their homes in search of better opportunities abroad.

Construction workers from the Philippines are among the most desirable workers in Japan. There’s a good reason for that – both skilled and unskilled Filipino workmen are considered to be hardworking, highly disciplined, honest people with a strong sense of duty and commitment.

Average Salary: Construction, building, and installation jobs in Japan pay about 303,000 JPY per month. The average salary ranges from 130,000 JPY to 880,000 JPY (highest average, the actual maximum salary is higher).

Filipino welders are in demand in Japan for many reasons. Due to the high hurdle of getting a job, many Filipinos make use of their skills and expertise to earn a living and support their families back home. They are fast learners, experienced in various types of welding, and they adapt easily to different environments with different people. Since they speak English very well, they often act as interpreters for other workers who may not know how to communicate in another language.

The Philippines is known for having numerous individuals with automotive-related skill sets. This explains why there is a high demand for Filipino technicians and other skilled workers in Japan. The ability to quickly diagnose vehicle problems coupled with their networking skills and desire to help others, make them an excellent choice when companies are looking for employees who can dive into different challenges without complaint.

Filipino agricultural workers are in demand in Japan because of the high level of food exports from Japan to the world, and for this reason, the Japanese government wants to ensure that their food is being grown by skilled workers.

Average Salary: Gross salaries for people working in the Agriculture and Food Industry in Japan range from a minimum of 150,310.00 JPY to a maximum of 379,120.00 JPY.

Keeping the aging population healthy and support is a growing concern for Japan. There are more than 2.7 million people aged 75 or older in Japan, accounting for 14% of the total population. To take care of this growing population, the government is eager to recruit caregivers from overseas.

Filipino Caregivers are in demand in Japan because of their hardworking and good-natured nature, which make them excellent caregivers. They can spend more time with their family back home than other foreign workers in Japan, who have to put in long hours of shifts without any holidays. The high demand for Filipino caregivers means that they can often earn more than what they would have earned back home.

The demand for Filipino machine operators has been on the rise in Japan. The reason behind this is that the country does not have enough people who are skilled and trained to perform these tasks. There are never enough foreign workers that can fill up their jobs in these companies and factories, so they are forced to import people who could do the job easily.

There are many reasons why a Machine Operator may be invited to Japan. These include The unique nature of the Japanese manufacturing sector; Where there is a heavy reliance on producing well-crafted goods and services, making a skilled worker essential to success in the Japanese market.

Japanese schools require their students to learn English, and many of the best companies in Tokyo encourage their employees to take English lessons. For these reasons, teachers are in demand in Japan.

Video: Typical day of a Filipino Worker in Japan | deltaTV

Check this video of a Filipina working in Japan.

OFWs or overseas Filipino workers are often seen as the face of the Philippines. They are hard-working, dedicated, and willing to do whatever it takes to provide for their families. And while there are many benefits to working in Japan, there are also some downsides. One of the biggest challenges of being an OFW is homesickness. Being away from family and friends can be tough, and it’s easy to feel isolated in a foreign country.

Additionally, working long hours and having little time for leisure can be stressful. Nevertheless, many OFWs feel that the benefits of working in Japan outweigh the drawbacks. The salary is good, the working conditions are generally good, and there are opportunities for career advancement. For those who are looking for a stable and well-paying job, Japan is worth considering.